I am waiting for a few extra bits so I can do some more work on my Brat hot-rod streetcar. Not wanting to waste the opportunity of a few hours modelling last night, I decided to start on an accompanying vehicle - this time with two wheels.

Here's what I've been working on: 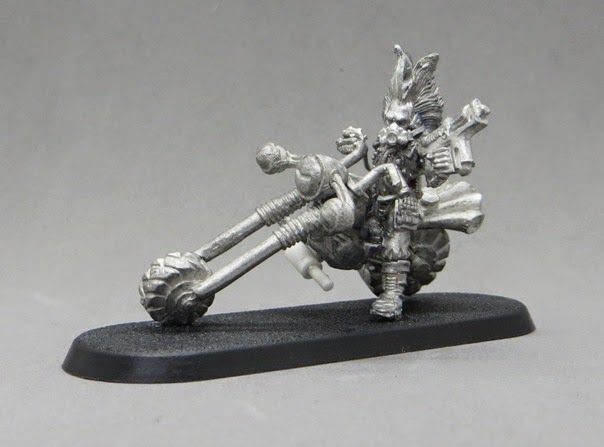 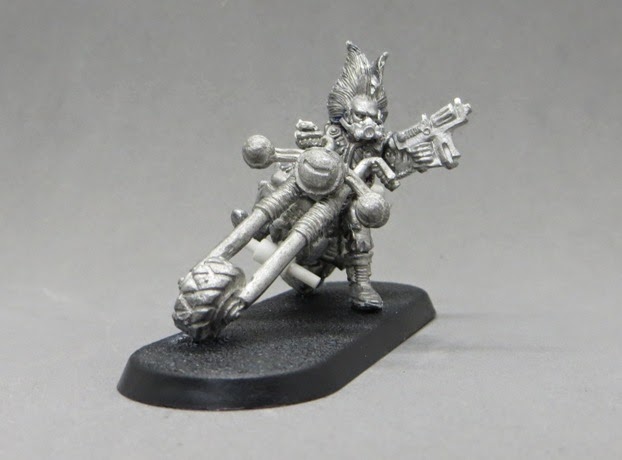 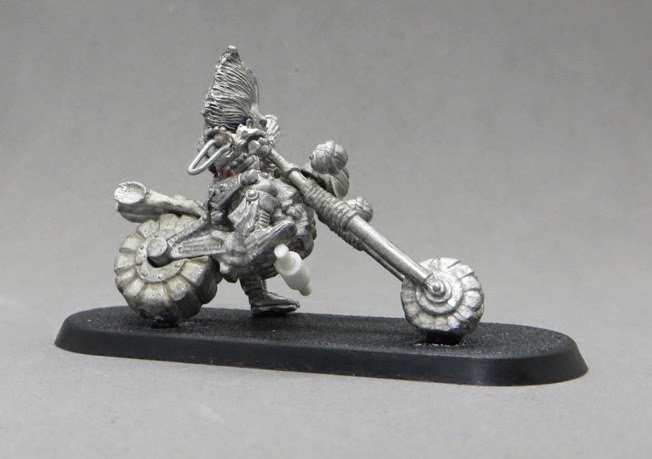 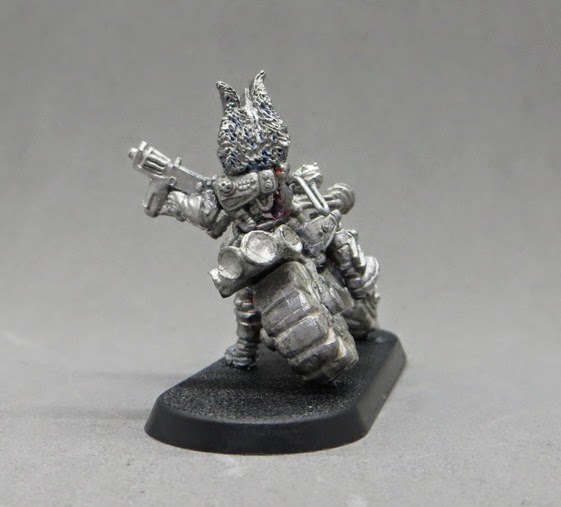 The conversion is at what I call the 'chop' stage and obviously still WIP. All the repositioning work has been done however, and I just need to resculpt some areas; primarily a new right arm and the crotch area.

My new Brat is riding a Squat bike (both rider and bike courtesy of Mutantdale over at the Oldhammer forums - thanks Dale!). The bike is largely unalted save for some thinning of the engine area and the addition of a foot bar. Yet again the rider is one of Jes Goodwin's Brats (in fact the very same model as the car driver). I removed and bent his right leg, cut and parted his hairdo and added one of the very nice Victoria Miniatures gasmasks.

The Brat is sporting a very fancy hand flamer (donated from a RT Eldar Harlequin), although I'm sure it's the least practical weapon for a biker! His right arm is currently just a bent paperclip with a hand from a Blood Bowl Elf.

All in all he's come together pretty nicely I think. I'll share more pictures once I've filled all the gaps!

Liebster Questions
I also had not one but two nominations for a Liebster award from Phreedh at Phreedh's Miniature Stuff and Clam at Clamshells and Seadogs. As I was already nominated back in March by Asslessman over at Leadplague, I won't repeat the whole thing, but Clam and Preedh put out some pretty nice questions which I'll answer.

Preedh's questions
1. Which currently unfinished piece (model or terrain) in your collection have remained a work in progress the longest?
I've got so many unfinished projects I find it difficult to answer this. I still have unpainted models from the late 1980s I've never done anything with. As for actually started projects, I still have some part-painted Space Slann which I think have been WIP for around 20 years!

2. What’s your biggest, most guilty of musical pleasures?
I really like William Shatner. Everybody else I've tried to interest in is work hates it!

3. What do you cook for a friend or date in an effort to really wow them?
I've got a book of traditional curry recipes. In the past I've picked out a couple and made a selection, including chapatis. Goes down a treat :)

5. If you were allowed to use only one web-forum for the rest of your life, which forum would that be and why?
Based on current usage, it's got to be the Oldhammer forums. I've drifted away from forums I used to use a lot (Warseer, Dakka) and now only regularly post over at Oldhammer. I guess the main reason is commonality of interest - people seem to like what I like!

6. Do you really expect to be able to paint all that stuff in your lifetime?
Honestly, no!

7. What’s your favourite go-to board game for a spot of recreational gaming fun with non-gamer friends?
I don't really play a lot of board games if I'm honest. Apart from snakes and ladders with the kids, I guess it's Scrabble.

8. Do you have an irreplaceable pot of paint that you dread the day it runs out?
Currently I seem to be using the old GW Kommando Khaki and Scaly Green paints on most of the things I paint. My Scaly Green has pretty much had it, but I've got another 3 pots of Kommando Khaki!

10. In 10 years time, what do you expect or hope being up to hobby-wise?
I'd like to be doing the same things I currently do, but hopefully with a large pool of finished figures to use. Oh, and I'd love to have a decent gaming table and terrain.

11. Which currently available miniatures range is your favourite?
Such a difficult question. I really like the Crooked Dice range for sheer retro cool.

Clam's questions
1. Sci-fi or fantasy? Ancient or Modern warfare? And why?
I think the honest answer is both, then neither. I cut my teeth on Warhammer Fantasy, ported across to 40k and then have dabbled in between the two ever since. I've never played anything historical.

2. How did you first get into the miniature/war-gaming hobby?
A kid at school bought in this really cool black and white magazine called White Dwarf. There was a mail order section at the back for things like giant scorpions and dungeon creatures for pocket money. We all clubbed together and sent off for a selection. The rest is history!

3. What's the latest hobby-related book you've read?
The latest book that was 'new' to me (as opposed to flicking through material I already had) was the joint GW and Chaosium Inc. 'Stormbringer' roleplay book based on Michael Moorcock's Elric novels.

4. What's your latest game you've played (tabletop/boardgame)?
I played a game of Space Hulk a few weeks back, but I played a Lego pirate game with the kids at the weekend ;)

5. Would you say you are more a collector, painter or gamer and why?
I'm more of a modeller than anything else - that's what drives me to collect models. I don't really enjoy painting, and I don't have many opportunities to game these days.

6. Who is your favourite miniature sculptor?
Jes Goodwin. Consistently excellent in terms of his miniature design and execution. When you look at his concept sketches, you understand why - he doesn't just draw something that looks cool, he works out the function of it too.

7. Who is your favourite rule-book/source-book - illustrator/artist and/or writer?
Really tricky question. I love the look of classic old school fantasy illustration, especially the black and white pieces. I have lots of good associations with lots of GW pieces, but I guess the best artist they ever had working for them was Ian Miller.

8. Who is your all time favourite miniatures producing company?
Games Workshop, 1985-1992 (or thereabouts).

10. What's your dearest item in you collection - and why?
I have a lot of cool things - old RT stuff, unreleased models, signed items, original art. What would I rescue from a fire? Probably my Skaven Blood Bowl team - I extensively converted and painted every single model. I have unreplacable items in my collection, but nothing which has had more time or effort invested by me.

11. What recent hobby purchase do you most regret (if any)?
I don't have any major regrets. I did pick up a set of Imperial Guard rough rider legs (more modern Attilan ones) for a planned conversion project, but they're not a good fit. I'm not overly worried about it though - I'll find another use for them one day!