Back in 2008, I happened to flick through my copy of White Dwarf 127 from July 1990 (still my favourite issue because of the Craftworld Eldar background and army list). There, on page 18, was a 10.5x8cm reproduction of a piece of Tony Hough artwork. The image, in the imitable Tony Hough style, shows a group of Eldar talking tactics, poetry or perhaps musing on what they will have for dinner, while in the background, beams of catastrophic energy pulse from one side of the image to the other.

If you're not familiar with the image, here it is as it appears in print:


It occurred to me that it would be pretty cool to actually own the piece, so 30 seconds on google later, I tracked down Tony's website and dropped him a line. Tony replied within a few days:

Thanks for your email. Glad to hear that the old stuff is still remembered and appreciated...I do on occasion sell off artwork originals, if there are any pieces of my GW art that you would be interested in, do let me know and if I still have it maybe we can do a deal.  All the best, Tony Hough


That sounded promising! A quick exchange of emails later and Tony confirmed he still had the original and would be willing to sell it. A short while later, I was the proud owner of a piece of GW history: 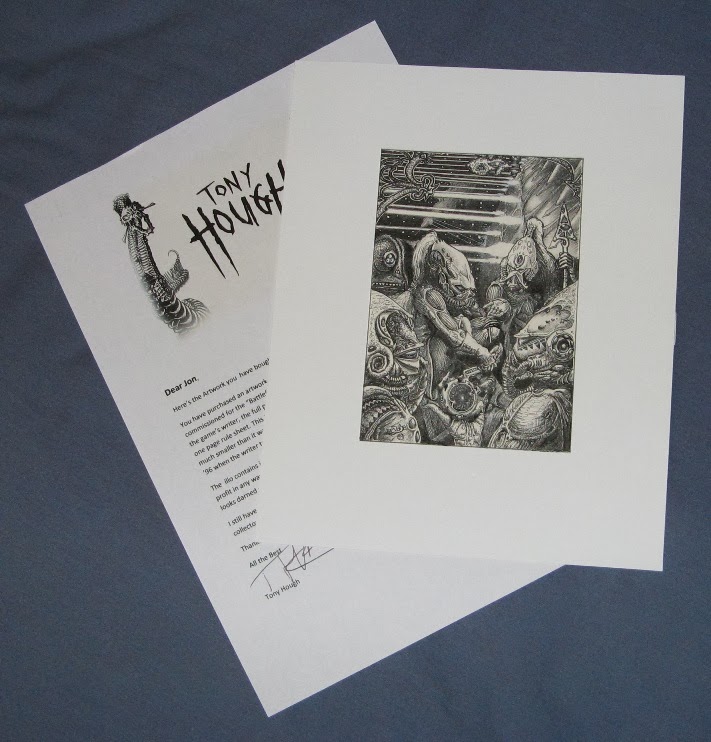 Tony was kind enough to send a letter detailing the history of the piece which you can read below. In summary though, this piece of art, titled 'Eldar Broadside', was on of a number Tony did for the unpublished Spacefleet game. 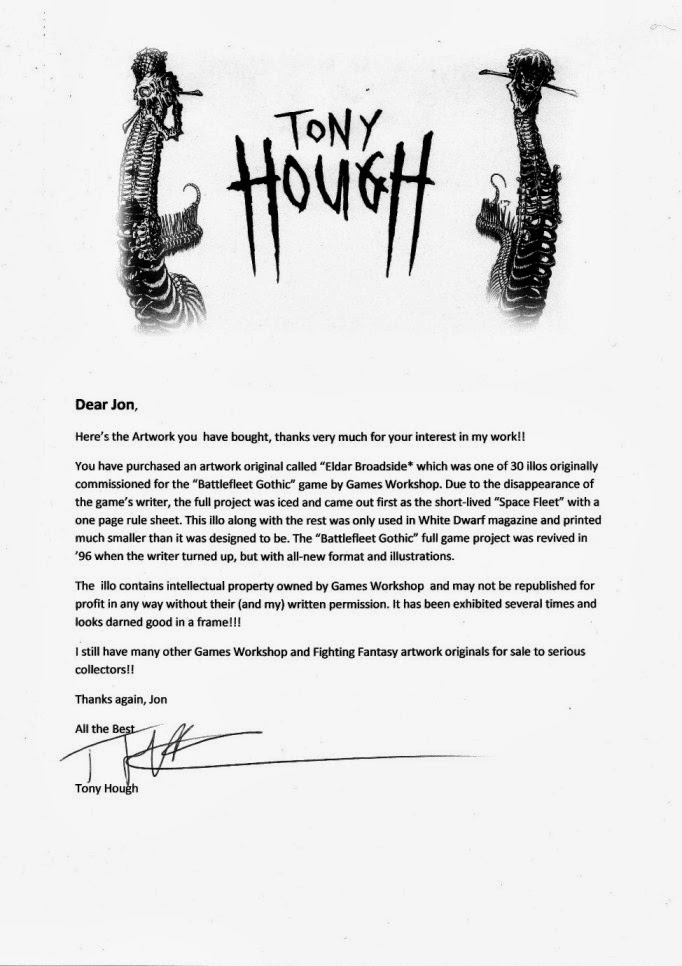 And, because I know you like such things, here's the original compared against the print version. You can see that the original was shrunk and cropped, losing most of the art nouveau style lattice in the top left corner, and reducing some of the sense of mass and scale of the background. The print process has also not been kind to the image, losing much of the intensity of the contrast between dark and light areas.


This purchase started off a bit of a collection; I now have a selection of original GW art, nearly all featuring Eldar, from artists including Karl Kopinski, Martin McKenna, Roberto Cirillo, Des Hanley and Paul Dainton. I would dearly love to add a Jes Goodwin original to that list, but that seems to be unlikely given that most of Jes' output is actually used as a catalogue of ideas for potential future use.

Last year, I added a few more Tony Hough originals to the collection - an additional pair of Eldar illustrations from the Spacefleet sequence:

In future blog updates I plan to showcase more of the original art in the collection, so watch this space!
Posted by axiom at 09:11