Earlier this month I splashed out on something unusual. This ebay auction from The Wargaming Trader listed a model I didn't recognise, but something clearly repurposed in the style of an Eldar Tempest. Given that the price wasn't too bad, I decided to take a punt and buy it - after all, it would fit nicely along with the rest of the Heavy Resin collection!


So, having arrived the other week, I finally got chance to properly inspect the model and do some comparison against my Forgeworld USA Tempest.

Side By Side
First impressions are clearly that the scale is rather different! From viewing the ebay auction, I had a mental picture that placed our mystery vehicle as the same size as the Tempest. In reality, the model is around the same size as a Falcon.

The Hull
The hull of the unknown vehicle differs from the Tempest. Rather than being hollowed out to save on resin, it appears to be either solid, or certainly very thick. The styling is however similar to the wedge shaped angular design seen on the Tempest and other upscaled Eldar vehicles based on the Epic ranges.


From the side on view below, you can see what appears to be a seam/joint between the upper and lower halves of the hull. I am uncertain whether they would have originally been separate pieces, or as a result of the casting process.
﻿

The Turrets
The turret shares a similar structure to the Tempests, with a small cupola turret on the larger main turret. However, the design is very different on the main turret - angular and wedge-shaped compared against the more elegant shaped Tempest turret. The guns in particular don't really strike me as having any relationship with Eldar designs past or present.

The little ancilliary turrets actually to look pretty similar. In fact when I originally saw the auction and had incorrectly scaled the tank up, I wondered if there was any familial relationship to the sculpts. In real life however, that's not the case.


Customisation
The tank has clearly been used in an Eldar army. Ian at the Wargaming Trader tells me it accompanied an Eldar lot, it has a classic old-school Eldar paint job, and also some small conversion work. Shuriken weapons have been added along the sides of the hull, mirroring the Tempest. These have been created from plastic Space Marine shoulder pads and shuriken pistols from the Eldar Guardians plastic weapons sprue, which I guess places the conversion at around 1992-1998


So, what do we think then everyone? If you happen to know where the original model was from, please do get in touch, otherwise this will remain an intriguing conundrum!

Edit: Thanks to Goblin Lee below, it appears that the mystery vehicle is a 'PORUZH heavy grav tank' by Ground Zero Games. Their 25mm version currently seems to be unavailable, but they do still have a 6mm version on sale: 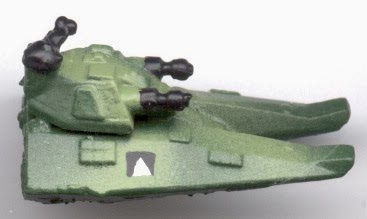