Back in January 2020, it seemed that Bring Out Your Lead might still take place that August. A commemorative figure was needed, and we were lucky enough to get Bob Naismith on board. The obvious choice for Bob was to sculpt a pirate captain to lead the scurvy-ridden sculpts that made up the original Rogue Trader pirate range.

And what a fine figure of a captain Bob sculpted for us!

Of course, BOYL didn't take place in August of 2020. It didn't in fact, take place in 2020 at all. So the green of Captain Quirke lay in a drawer until finally, in late September 2021, he was cast and distributed to the attendees of BOYL 2021. 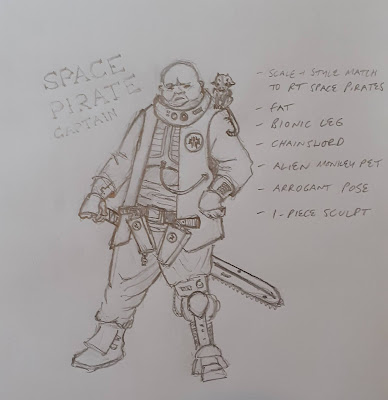 We gave Bob a concept sketch to work from, but he elevated the concept into an imposing mountain of a man, full of piratical swagger. The changes in pose and additions like the lovely little bionic claw just add to the presence of the final sculpt. 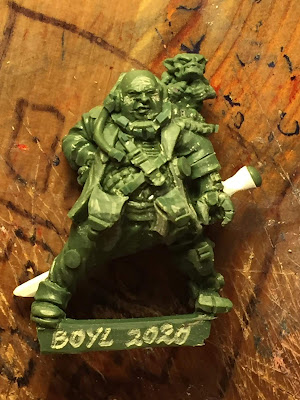 I love seeing some of the construction details and approaches that Bob has used, like the sword made from plastic strip, and the areas which have been carved into shape from cured greenstuff. Note that the tag on the metal casts reads BOYL 2021 where Kev Adams adjusted the date for us! 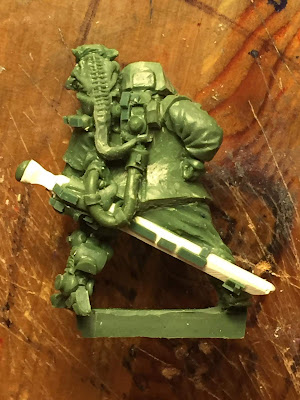 As mentioned above, the figure was only available to attendees of Bring Out Your Lead, and follows a fine tradition of great, unique sculpts being made for the event. My painted version of Captain Quirke is below.

The notorious Space Pirate known as Captain Naibob Quirke is commander of the dreaded Darkstar Reavers. From the bridge of the Jagged Claw, he has terrorised the outer rim, far from the reach of Imperial law. His crews operate from a continually roving flotilla of cutters, jolly boats and orbital landers, seeking high value cargos and slaves to sell to the unscrupulous. 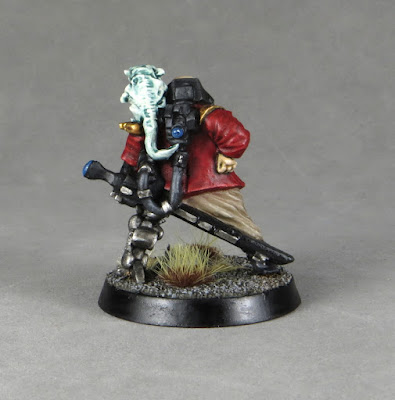 Unfortunately, there are no spare Captain Quirkes floating around to pass on. But if you are able to make it to next year's BOYL, there's likely to be another lovely figure for attendees.