I was really pleased with my pair of T'Sulian xenos warriors that I made last year, and I knew from the outset that I was likely to make some more.

It just so happened that the theme of the current painting challenge over at the Oldhammer Facebook group is #justthetwoofus (paint a pair of models which share a connection or theme), and a germ of an idea formed. I decided I would make a pair of non-combatant tribesfolk who may eventually inhabit a future nomadic campsite that I may or may not end up making (depending on how big the tribe gets!).

So my pair of models are a T'Sulian mother and child. My starting point was a Dark Future cultist for the child (a 20mm robed adult works perfectly as a 28mm robed child), and a solid based Fox Priest from the C05 Oriental Heroes range. 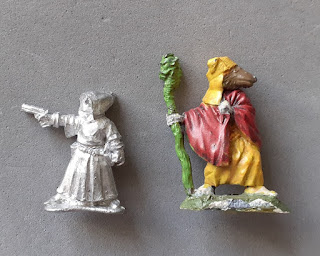 I removed the head and staff from the Fox Priest, and added the new head made from the head/torso piece from a Blackstone Fortress spindle drone. You might notice that I cut down the the head vanes and filed a new organic curve on the head (I figured that a female might have smaller head vanes from a male). I also added some decorative hangers (data probes from Adeptus Mechanicus Skitarii). 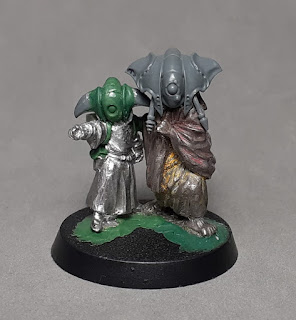 I used the head vane parts I'd removed from the female's head and used them to help construct the child's head, which was primarily created from greenstuff. 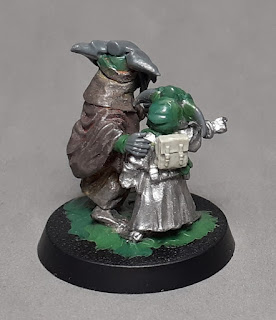 The female's hand came from the Necromunda Delaque set, whilst the child's backpack was cut down from a Forgeworld Elysian pack. 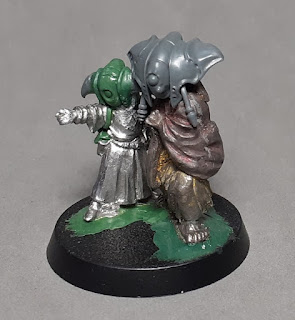 I also removed the pistol from the Dark Future cultist, filed and carved off any evidence, before removing the hand and adding a 45 degree twist to make it look more natural. 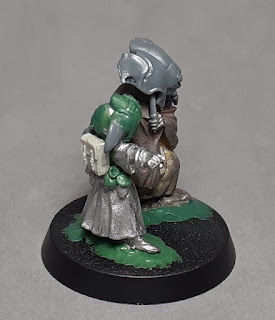 After that, it was a case of painting to match the warriors I'd originally painted. I figured that the blue robes might be culturally important, so replicated those, although I did use 3 different blues for variation (I'm not sure it actually reads that well in the final painted figures). 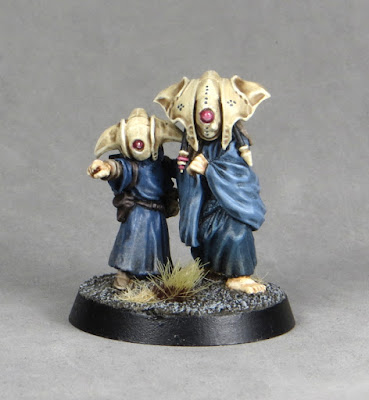 The decorative markings were a late addition to the paint scheme - I felt she needed some more visual interest, and some tribal face paint  seemed to be the right way to go. 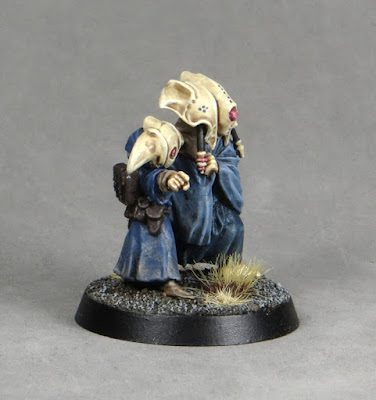 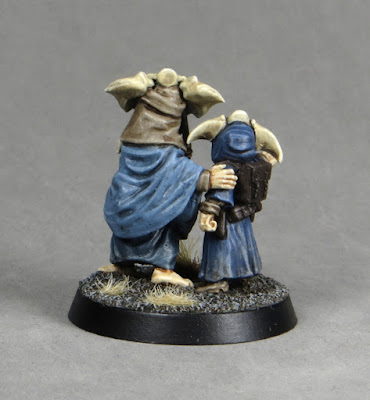 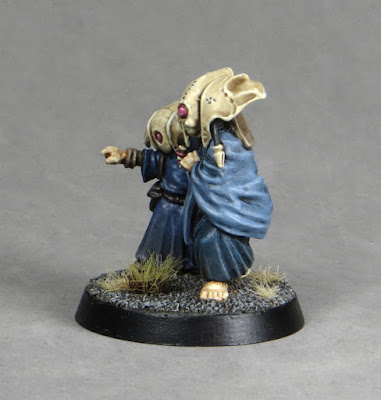 All in all, I'm really pleased with how the figures came out - I really like how they integrate into a little narrative diorama all within the confines of a single 32mm base!