I'm not entirely sure when it was that I started getting interested in Citadel Lone Wolf range. I'm not by inclination a fan of pre-slotta miniatures, or a long-time devotee of the Lone Wolf books. But at some point, I looked at Citadel's 1984 Lone Wolf miniatures, and thought they looked cool.
As these things go, I acquired a couple of the Citadel Guard. Then, perhaps a few months later, a Guard Captain. At some point last year I picked up the Bandit. And then I started formulating the idea of a little warband of the Citadel Guard. I could do a few head swaps perhaps. I could add the Bandit with some other crossbowmen. I could commission John Pickford to sculpt me some heads and shields. 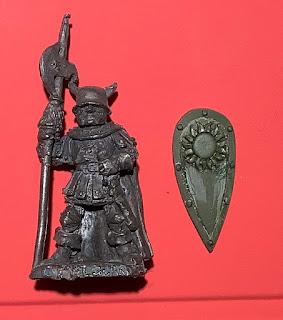 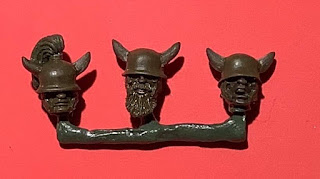 So, at the end of 2019, I'd got a nice little group of miniatures, plus some custom bits to convert them with, all for a game I didn't play, in a different genre to my usual figures. There was a strong possibility that this could be a big hobby white elephant.
But happily, cheetor proposed a new challenge over at Scale Creep. The Mordheim Five-a-Side Challenge was just the motivating factor I needed to get this project up and running.
It's pretty clear that the Citadel Guardsman sculpted by Alan or Michael Perry was based on the above illustration by Gary Chalk. My main aim was to try and make sure that the band of Guardsmen were broadly visually coherent to the illustration and two actual Citadel Guard sculpts. I could then sort out the Mordheim wargear to fit around the models. I plan to use the warband as Reikland Mercenaries in Mordheim as this seems to fit the idea of a well-trained force.
For the Five-a-side challenge, I selected two heroes and three henchmen from my draft list:
The champion and warrior with halberd are unmodified Lone Wolf figures (apart from cutting them off their integral bases). The warrior with the mace is a simple weapon swap on another Lone Wolf figure, whilst the marksman is a Citadel Feudal / Bretonnian crossbowman, selected because of his similarities to the Lone Wolf Bandit I intend to include later on (note, also sculpted by the Perrys).
The captain however was much more of an involved creation! He started life as the infamous Felix Jaegar (star of the Gotrek and Felix novels). The model was sculpted in the early 1990s by Michael Perry, but provided a good base. 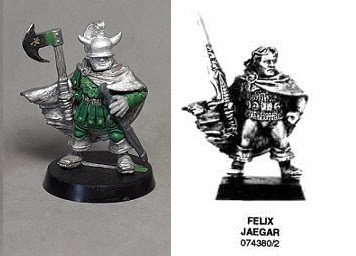 I removed the head and both original arms from the elbow down, as well as the sword. He received a new John Pickford head, before I sculpted a whole host of details from the coat of mail to the knee armour. His new axe was spliced from the blade of a Citadel Guard's halberd and a wood elf axe. The sword came from my bits box and might be from a Frostgrave kit. The left hand was from a Mordheim Mercenary / Empire Militia sprue.
Painting-wise I chose a predominantly blue and yellow scheme, factoring in a bit of dirt and grime to represent these guardsmen having been on patrol for some time!
I can't wait to get started on the next group from the warband. The next five will probably include another mace/shield champion, a second halberdier, a pair of crossbowmen and perhaps a swordsman (TBC!).
Quite why a detachment of the Citadel Guard have been sent to Mordheim is a complete mystery. They are a disciplined, well trained and well-armed group, quite unlike most of the treasure hunters and bandits the City of the Damned usually attracts. Their polished armour and blue and gold livery hardly blends in. Although other mercenary bands jeeringly refer to the Guard as Yellow Backs (after their mustard-yellow cloaks), it would be a brave leader who decides that his warband should tangle with the veteran soldiers. 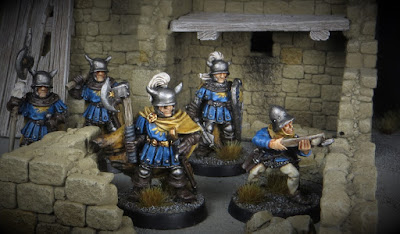