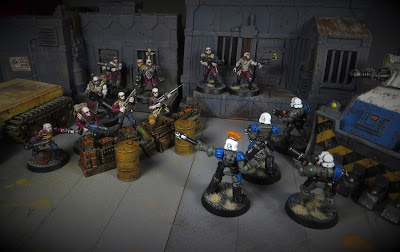 The Skallytong Boys of House Morlaque have been steadily increasing in strength - coming to the attention of Guilders and Enforcers alike! I'm now 4 weeks in to my gaming group's new Necromunda campaign, 'The Stern Contracts'. My Morlaques are mid-ranked when it comes to Reputation and earning a reputation for being sneaky (something to do with bald heads and goggles).


I haven't shown off the more interesting half of the gang yet - the guys with the big guns and impressive gear. First up are a couple of special weapons and a juve.


I know juves can't have chainswords, so for now he's armed with an exotic-looking fighting knife! 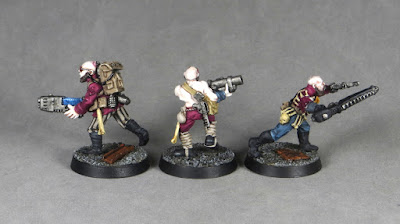 All three figures have been converted to a greater or lesser degrees. The ganger with a grenade launcher (gangers can get special weapons now!) is a pretty simple conversion from a Gorkamorka Digga boy armed with a blunderbuss. I trimmed off the barrel of the blunderbuss, and added a section cut from a pen for the drum magazine. Like all of his friends, he got a brand new beard, bones and some eyewear. 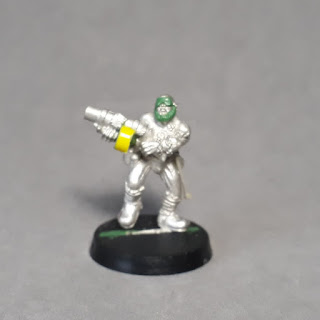 The plasma gunner was converted from the old Last Chancers character, Brains. I removed the lasgun and replaced it with a Forgeworld plasma gun. He too got a beard and some bones (including a natty ribcage shoulder pad). 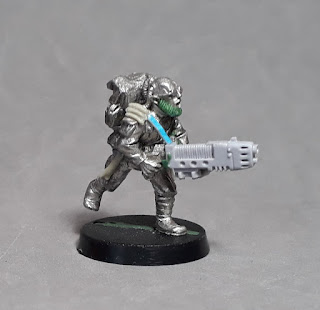 The juve was based on an actual unmodified Hunter ganger. His left arm again comes from Forgeworld (the Chaos Renegades I think), while his right was donated from an Eldar Harlequin.

Of course, every Necromunda gang needs an inspiring Leader and iconic heavy. Traeger Gravaman is the Leader of the Skallytong Boys. I built him with weapons that I like, rather than for pure efficiency, although with his boltgun, hand flamer and sword (he can't afford the chainsword yet), he's pretty versatile. 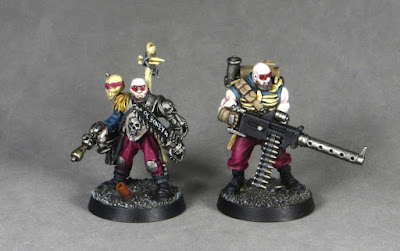 Silo Mervin totes the classic Necromundan heavy stubber. He's the only member of the Skallytong Boys large enough to carry the gun (ironically enough, he's picked up a long term injury and is actually only Strength 2 in the current campaign!). 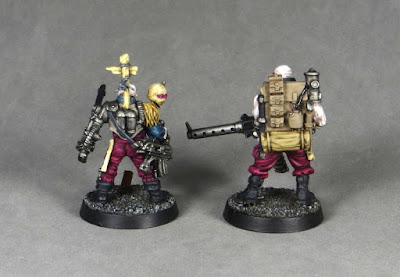 Traeger is made from a host of different parts. The torso is from a Confrontation Bounty Hunter, with the hair removed from the skull icon on the chest armour. The head is from an old Empire Flagellant, and the bionic arm is from an old Necromunda Bounty Hunter.

There was a bit of chopping and changing before I settled on the final look for Traeger. Originally I had him carting around half a corpse on his back. But some sensible people suggested this looked a bit silly. 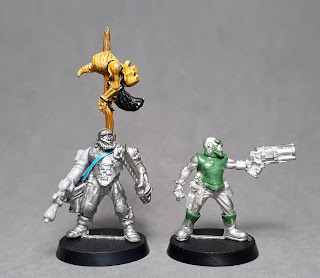 I'm also indebted to Asslessman who suggested a furry shoulder pad and a skull, even being good enough to draw me a fine concept sketch: 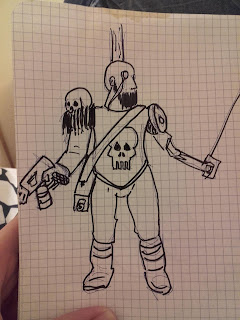 I ended up with a much better looking leader as a result I think. 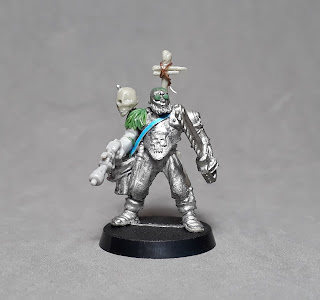 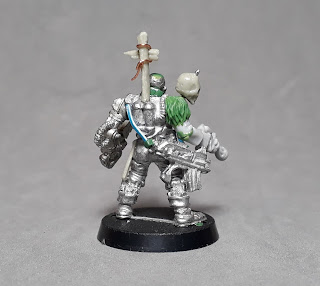 Silo Mervin was based on Sergeant Harker - an Imperial Guard character who usually hefts around a heavy bolter. I replaced the heavy bolter with a heavy stubber (thanks Dean), removed the Mohican and added beard, bones and glasses (yet again). 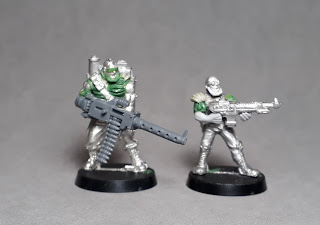 I've got another three or so models I want to add to this group, but for now I think they're a pretty decent-looking gang. Hope you like them! 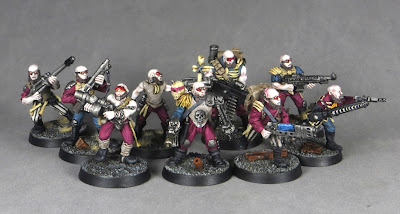