﻿
This Wednesday evening sees the start of my gaming group's Shadow War: Armageddon campaign. With that in mind I've finished the 9 models required for my starting Kill Team, with an additional Guardsmen to bring me up to full strength. And a right dirty-looking crew of scumbags they are too!
﻿

The Necromundan 5th regiment, may not be as famous as the Lucky 7's (7th) or the 'Spiders' (8th), but they have a solid reputation for urban and guerrilla warfare. The Necromundan 5th traditionally recruit from the Quinspirus hive cluster on Necromunda, from which they derive their swashbuckling nickname of 'Quinspirios'.
Led by Veteran Sergeant Mylnar, Kill Team Quinspirios Alpha is made up of veterans from one of the three scout companies of the Necromundan 5th. Subject to brutal levels of casualties during the Ult-Gar uprising, the survivors of all three companies were formed into hardened veteran squads - each Guardsman with a motley selection of scavenged and favoured equipment. Quinspirios Alpha is a specialist infiltration unit, often operating behind enemy lines on assassination or sabotage missions. They have named themselves after the ripperjacks of their homeworld - ambush predators who can disable and despatch a victim in a matter of minutes.
﻿ 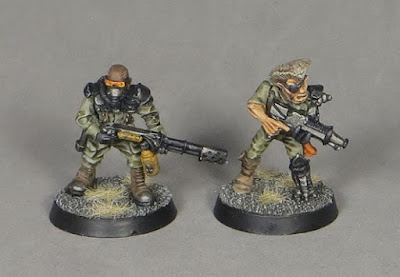 The final pair of recruits to the Kill Team are in the form of my flamer specialist and a veteran guardsman. Specialist Bey is made from an old Confrontation Tech ganger, with the addition of Death Korps of Krieg arms from Forgeworld. I confess that I attempted to reference the excellent Ogryn Chompers by cheetor when I was painting Specialist Bey's sunglasses (I didn't quite pull off the look, but it's passable!). The final addition to the Kill Team is an unmodified Rogue Trader space pirate. I wasn't sure how well he'd blend in with his exotic haircut, bionics and stubby weapon, but I think with once he was painted to match, he looks pretty much the part. In game terms I plan to count his weapon as a shotgun rather than a lasgun. I figure it looks odd enough that it could be anything in game terms!


﻿So that's the Kill Team finished. I need to paint up some special operatives just in case. Hopefully they'll make the Emperor proud!
Posted by axiom at 17:24