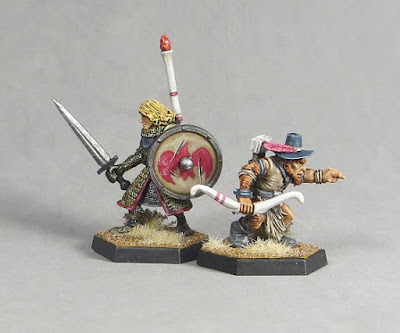 Model aside though, Hawkmoon has the reputation of lacking much depth of character. He's a champion of the oppressed rural few against the depraved ruling urban elite:


But given that he gets to carry a stupidly powerful laser weapon (flame lance), I don't really mind if he's not as emo as some of the rest of the Eternal Champions!

I can't recall that many decent physical descriptions of Hawkmoon. He doesn't wear a particular recognisable costume. In fact his only key physical characteristics are his blonde hair and the black jewel embedded in his forehead. With pretty much completely free rein, I painted Hawkmoon in metallic with flashes of pinky-red and blue. 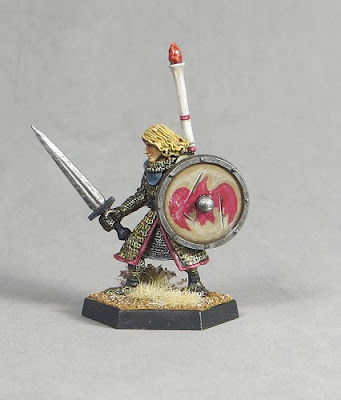 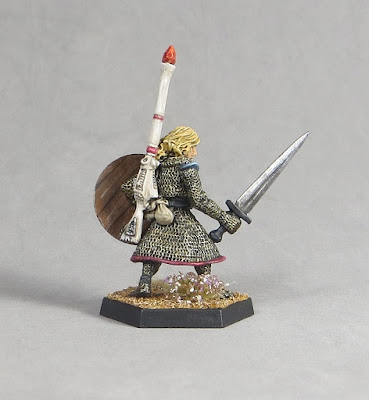 As a nod to 'canon' (in as far as there is a canon image of Hawkmoon), I turned to the cover of the Sorcerer's Amulet by Jeff Jones (also published as The Mad God's Amulet).

Jeff's Hawmoon has more of a sense of Conan about him, but I really like the shield design, so shamelessly copied it for my Hawkmoon.

Like most of the incarnations of the Eternal Champion, Hawkmoon is accompanied by an incarnation of the Eternal Companion - sidekicks of the champion with generally more light-hearted and sunny dispositions. Oladahn accompanies Hawkmoon on most of his adventures. When we first meet Oladahn, he is described thus:

"The little man's face was covered with fine, reddish hair and thicker fur of the same colour seemed to cover his body. He was dressed in a leather jerkin and a leather divided kilt supported by a wide belt. On his feet were boots of soft doeskin, and he wore a cap into which were stuck four or five of the finest flamingo feathers..."

(For reference, flamingo feathers from the mount Hawkmoon had been riding, and Oladahn had shot with bow and arrow, then roasted).

Citadel never produced an Oladahn figure, and whilst Eureka have recently produced one, the quasi-Greek look he sports doesn't really work for me visually. The only option then, was to create my own version of Oladahn.

I started with Citadel's Ghan-Buri-Ghan (Chief of the Woses), released in 2006 under their Lord of the Rings licence. I replaced the javelins with a Warhammer elf bow and sculpted the jerkin and boots. The hat game from a Warlord Games accessory sprue, and the quiver from the same Warhammer elf.


I stuck to a dark skin tone with patches of red fur and hair on Oladahn. Most of his outfit is neutral colours, enlivened with a natty blue hat with its flamingo feather!﻿ 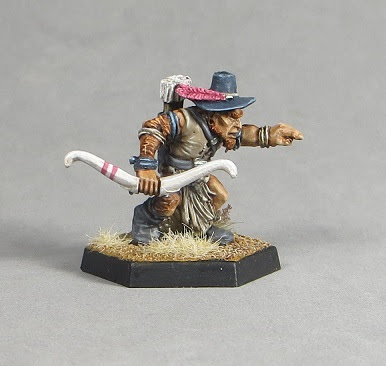 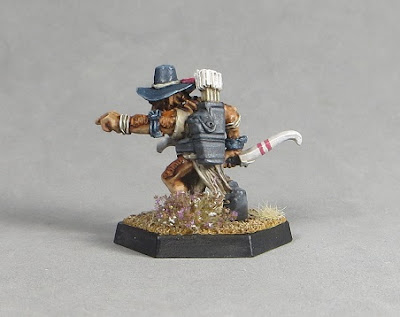 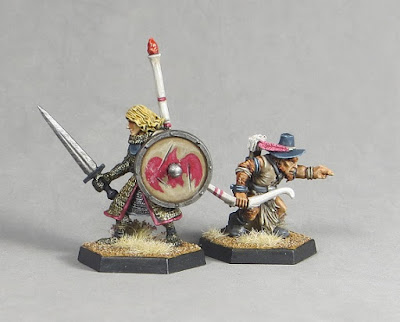 Overall, I'm really pleased with how the pair turned out. I can't wait to see Hawkmoon alongside Elric, Erekose, Corum and the rest!
Posted by axiom at 14:20