Every worldly-wise space adventurer or rogue trader is familiar with the wide variety of xenos creatures he or she may encounter: burrowing ambulls, river-dwelling crotalids, the ferro-beasts of Yimbo-bim.

However, in the arid lowlands, there exists a similar animal, occupying a similar ecosystem niche. The Cthellean Cudvark, also known as the False Cudbear, exhibits many of the same physical properties as the Cudbear: large powerful frame, long talons, shaggy purple fur. The Cudvark is however suited ideally to the arid environment, being equipped with powerful digging claws, large ears to radiate heat, and a fur-free head to enable it to investigate prey burrows without becoming clogged with sand and dust. 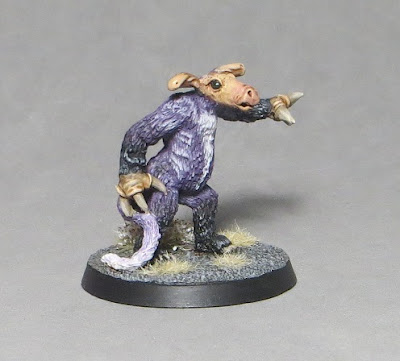 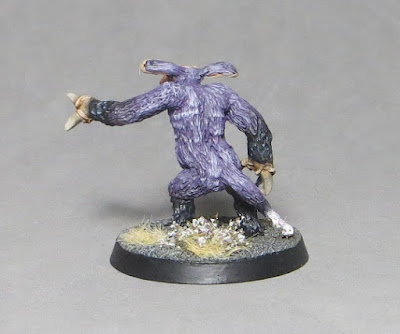 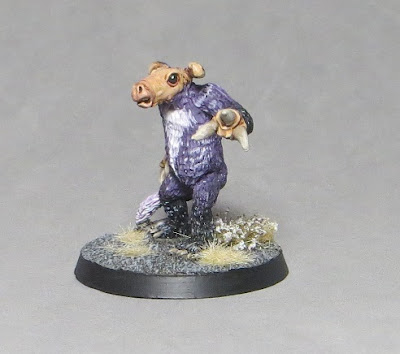 In so far as is possible with a giant bipedal animal with purple fur, I attempted to paint the Cudvark in a naturalistic manner, with fleshy tones on the face, lighter underbelly, and darker fur towards the limb extremities:
The Cudvark is of course no such thing. It is actually a repurposed Tweak from the 45mm 2000AD Miniatures line from Titan Distributors (sculpted and cast by Citadel). 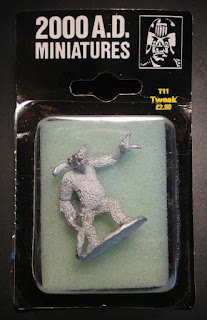 To my mind though, the figure was perfect to represent a dangerous alien beastie for wilderness games (or possibly as a star attraction at the inter-galactic zoo!).﻿
﻿
Posted by axiom at 10:45