Back in 1973 a certain Richard O'Brien wrote a musical called the Rocky Horror Show. In 1975, the stage show was re-worked into a film called the Rocky Horror Picture Show. Reviewed as "tasteless, plotless and pointless" in 1978, the film (and musical) have since gone on to be considered cult classics.
Why am I writing about the Rocky Horror Picture Show? Because Richard O'Brien played the part of Riff Raff, manservant to the alien transvestite Frank N. Furter. And Riff Raff looks like this:
Fast forward a handful of years, and in 1987, Citadel release a licensed range of figures based on Michael Moorcock's Eternal Champion novels. Jes Goodwin sculpts many of the range, including Tanglebones, manservant of Elric, the Melnibonean Emperor. And Tanglebones looks like this:
Notice the resemblance?


What has this all got to do with 40k and Navigators? I'm glad you asked, as I procured a copy of Tanglebones with the express intention of turning him into a Navigator.
Aside from the singular feature of a large black warp eye in their foreheads, Navigators are characterised by a range of unusual body distortions - they are regularly described as being twisted or crippled, with atrophied limbs, webbed hands, absent noses or gills. In short, they are somewhat bizarre and odd-looking.
Tanglebones seemed an excellent basis to convert into a new Navigator. My conversion was relatively simple - I removed the dagger in his right hand and replaced it with a snazzy looking pistol (Navigator houses are wealthy of course). The pistol was from the Mordheim Amazons weapons sprue, now sadly rather difficult to get hold of. I added the warp eye to the centre of his forehead with a little ball of greenstuff, then added a lid over the top and blended it in. The final addition was the cane which the left hand was crying out for. I originally used a pin, but it looked rather underwhelming, so I replaced it with a length of paperclip topped and tailed by a couple pieces cut from the aerial from a Skitarii backpack. 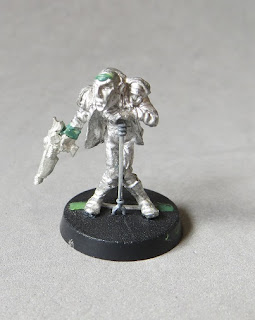 House Saq D'os has been bound to the Urchax Rogue Trader Dynasty longer than memory can recall. No doubt contracts and treaties exist gathering dust in the vast libraries of Saq D'os mansions, but none now would know where to seek them. The Urchax Dynasty has been granted a Charter of Exploration, charged with travelling beyond the boundaries of the Imperium, seeking lost human colonies, STC technology and more. The Navigators of Saq D'os have benefitted greatly from such high risk but high reward expeditions. Navigator Ryaph has travelled farther than most men can imagine - he has personally guided Rogue Trader Kaliman Urchax through the astral infernos of the Firestorm Cluster. He has  personally gathered delicate shatter opals on Crymelian, and placed them in beds of black velvet to sell for a planetary income. He has navigated the warp to the edges of the star charts, and looked into the voids beyond.
﻿ 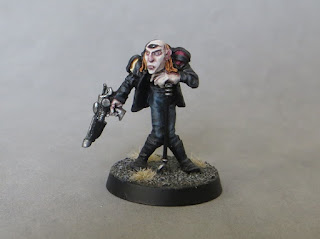 Black seems to be a colour regularly associated with Navigators - their warp eyes are black, they have been described as being clad in rich black silks. With this in mind I decided to give Ryaph a dark outfit to contrast with very pale skin. This had the added bonus of echoing Riff Raff's outfit from the Rocky Horror Picture Show! 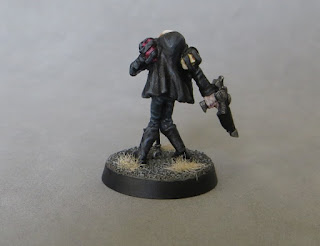 To add an element of flamboyance, I added some contrasting colour to the slashed shoulders on his jacket, and some gloss varnish to the black of his cane and pistol.


Now, go and watch the Rocky Horror Picture Show. Why not dress up?!