In spite of having been a gamer for over 25 years, I have always lacked decent terrain. When I was a kid, we didn't care. When I played in a club, I used the club terrain. Even now, my regular gaming nights are at GW's Warhammer World, and there is plenty of terrain on offer (even if it is a bit homogenous). One of my ambitions for 2016 is to rectify this. I already made some terrain last year, but this year I'd like to increase the amount I have with the ambition of creating a fringe world settlement, complete with a range of buildings and warehouses, landing pad and hopefully a larger administrative building.
To get back into the swing of terrain, I've been putting a couple of painting sessions aside over the last few weeks to paint up some smaller scatter pieces to 'dress' the larger set when complete. To my mind scatter terrain is hugely important - it helps to create a believable environment for your characters to inhabit. Tables without scatter terrain can look rather bland and unrealistic.


The first two pieces of terrain are a pair of unedified tech units. They might be well-heads, vent stacks or moisture vaporators. I'm not sure, but I think they look cool! The lower sections were two loose resin bits I picked up from the rummage boxes at Spirit Games. It turns out they're bases from Scotia Grendel's automated sentinel towers, but at 50p each from the rummage box, I wasn't going to argue! The top sections are engine parts from Fenris Games. They received a very quick and dirty paint job with blister pack foam weathering, a splash of washes, and some heavy engine oil (mixture of watered down black paint with gloss varnish).
﻿ 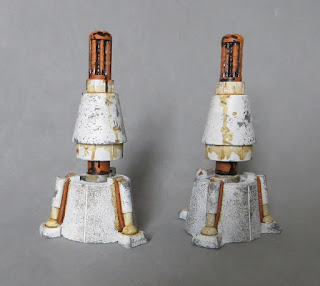 Next up is a tracked flatbed truck and some barrels. The barrels are plastic GW barrels that received pretty much the same paint job as the moisture vaporators. 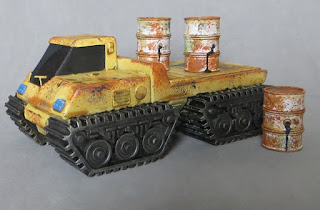 The truck itself is an old school resin kit, currently available from Demonscape. The kit is made up of flat cast resin sections, but it goes together nicely to produce a pretty decent civilian vehicle to use as terrain or possibly in a game with vehicles. 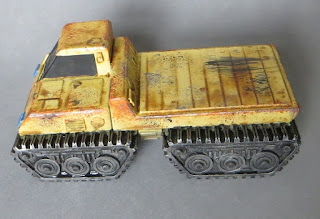 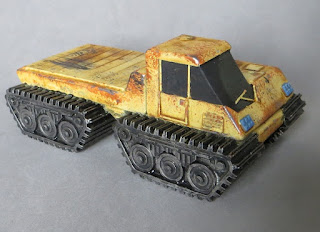 I gave the truck another quick paint job, after priming and then spraying with a Halfords yellow car spray. The entire truck was washed with a sepia wash, then blister pack foam weathered for the rust and grime. Some of the edges got a little bit of boltgun metal paint. 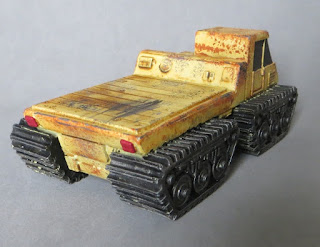 I finished by painting the lights and windscreen - job done! I probably need to go back and rust up the tracks a bit, but for now it serves its purpose. Hopefully by the end of the year I'll be able to show you a full board of terrain, with these little scatter pieces just sitting in one small section.
Posted by axiom at 16:12