Earlier, I took the opportunity to take some better photos of my winning entry into the BOYL 15 painting competition from the weekend.

I've showcased all the figures previously - they comprise Lord Greiss, Lady Greiss, bodyuard Eduardo Murat, Professor Barossus and Lope, the household huntsman. Although the models were linked through a common colour scheme, I wanted to tie them together with a display base. I decided on a very simple narrative of Lord and Lady Greiss leaving a doorway, accompanied by retainers.

I wanted the base to frame the models, rather than distract from them. To that end, I added an archway behind the figures and a small half-buried barrel as a counterpoint in the foreground. Other than that, it was pretty much a case of adding texture and some patches of grass and flowers. 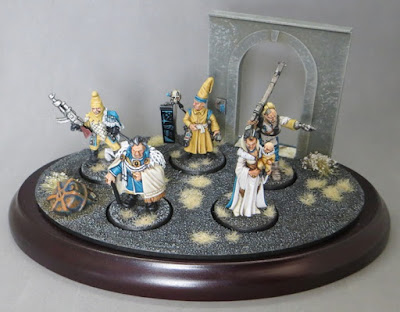 The display base was made from a cheap oval plinth I bought from ebay. For the textured element, I used an oval MDF movement tray. I sawed a sci-fi barrel in half, then textured the whole base with sand. 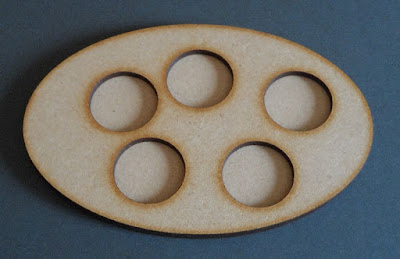 The doorway was made from a cheap arch from a construction kit called Bayko. I added a lintel to the top, and a small entry keypad which was nabbed from the RTB01 plastic Space Marine kit. 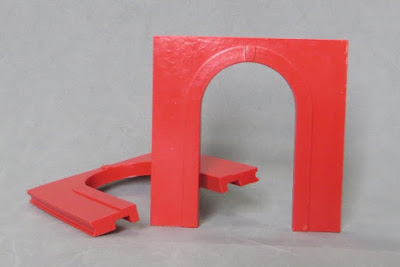 To give a hint of the sense of an interior behind the archway, I cut a piece of plasticard to shape and scored the outline of chequered tiles. 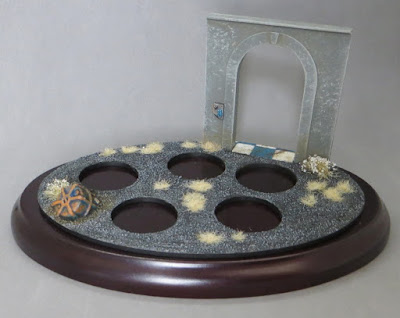 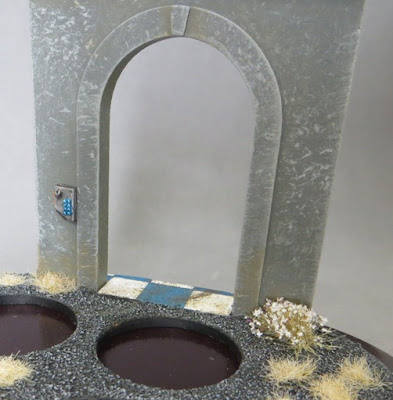 Overall, I think it does its job pretty nicely - reinforcing the link between the figures and making them stand out as a nice group.

I was away in a hotel for a couple of nights with work earlier in the week. Once again I took paints and a figure to try and make good use of the time. This time I painted up another figure for my Inquisitorial warband, a rather humourless chap named Advard Munk. As a character, Advard, armed with a multi-laser, has been playing in my Inquisimunda campaign for a few weeks, having been represented by a stand-in. 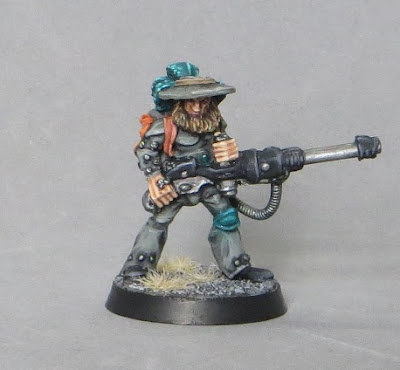 He's made from an Eldar Harlequin Death Jester, with the gun barrel from an Epic-scale Warhound scout titan, and the head from a Marauder Empire champion. I appear to have inadvertently made some sort of flamboyant space-Quaker as a result! 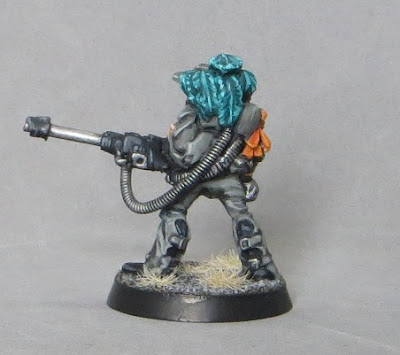 Hopefully Advard will be reaping some kills in due course.
Posted by axiom at 14:39