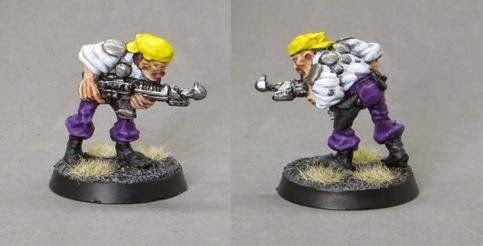 Thern is another hired gun in the employ of Guilder Yakob Pento. He has a rather peculiar sense of fashion, favouring bell-bottom trousers, billowing shirts and a cap worn backwards. He's a rebel you see!
Thern is the second figure from the Rogue Traders Pirates range to be incorporated into the Juction Trading Guild. Quite why he's holding his autogun as he is, I have no idea. I'd also guess that armour plates sewn onto a shirt probably don't make the most effective armour against projectile weaponry, but I'm not arguing with him! In retrospect I would have painted him with yellow trousers and a purple hat to avoid him looking too uniform with fellow Space Pirate Manu Loat (he of the striped trousers). But I can't be bothered to repaint him and I just won't stand them next to each other.
Five models is a bit of a milestone for this particular faction - in my head it is the minimum needed to make a playable selection. Here's the Junction Trading Guild in all their yellow and purple glory:
﻿
Posted by axiom at 08:55