The best thing about joining in with online hobby initiatives is that they prompt you to do something you hadn't really planned to do, and in some instances they result in something you couldn't have even conceived of. The #JusticeForGary painting challenge over at the Oldhammer Facebook group is a simple concept - paint up a figure that was sculpted by Gary Morley and he will pick his favourite (still time to enter as the closing date is 30 June).

I knew I wanted to paint something for Necromunda, and was leaning towards one of Gary's bounty hunters, but then I decided to see if I could convert some unique figures using 100% Gary Morley parts. I ended up with a bounty hunter and his lucky caryatid companion - created completed from parts sourced from Gary's figures plus a little bit of greenstuff to hide the joins!

There are many thousands of bounty hunters operating on Necromunda. Some specialise in tracking down criminals, others hunt down up-hivers fleeing social embarrassment. Still others delve into stranger places, seeking out vampiric psykers with life-leeching powers, shape-shifting mutants and hideous eyeless ghouls. Abrym Shasta specialises in the tracking of the strange and unexplained, accompanied by the blue-skinned caryatid Sound-of-Memories. Shasta says little and is seen infrequently, only visiting major trading posts or settlements to collect bounties in return for the heads of his quarry.

I've ended up with a sort of an Old West character, which perhaps shifts more towards a vampire hunter vibe once you add in his companion. Logic tells me that Karloth Valois would be an excellent choice as a follow-up figure!

Abrym Shasta is made from splicing elements from three Gary Morley sculpts. The legs are sourced from a Necromunda bounty hunter, whilst the upper torso is from a Van Saar ganger. The hat was cut off from a second bounty hunter and added to the model after cutting and filing flat the Van Saar head above the brow. I added a few extra greenstuff pouches to conceal the join at the waist a little better. 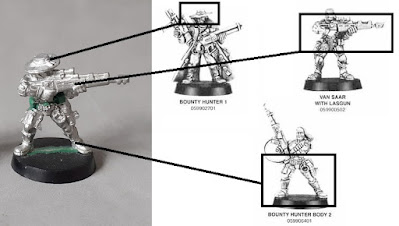 Sound-of-Memories is built on the Warhammer Quest character Bogoff the snotling. I removed the snotling's head, then added one cut from a Van Saar juve after filing away the hair. The wings were cut from a Warhammer wight's helmet. There was minimal greenstuff work needed - just the wing muscles on the back and smoothing over on the bald head! 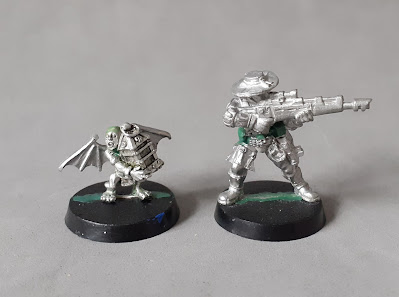 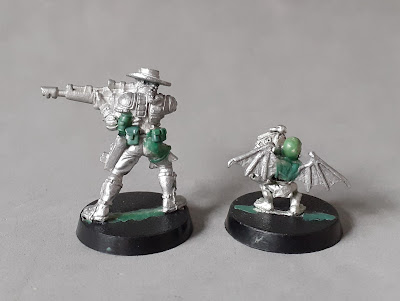 I went for a pretty traditional colour scheme that was aiming to evoke that Western / Vampire Hunter feel. So he got a white "shirt" and dark "waistcoat" - hopefully this helped move the figure away from the one-piece feel of the Van Saar outfits. 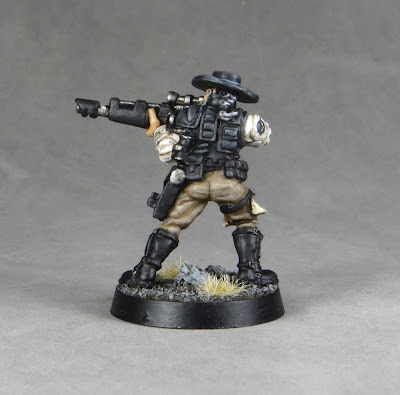 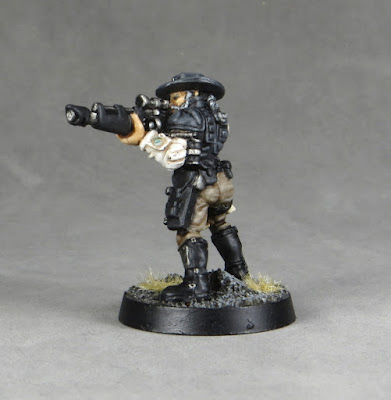 Caryatids are of course blue-skinned. I have painted up a couple of caryatids previously with more vivid blue skin, but decided to go for something a little more muted this time. 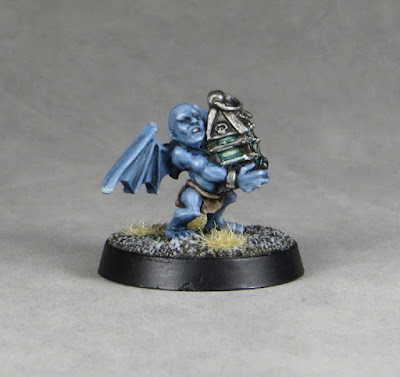 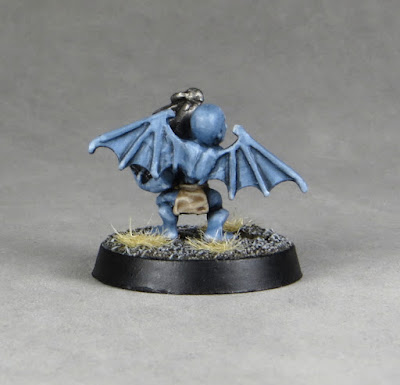 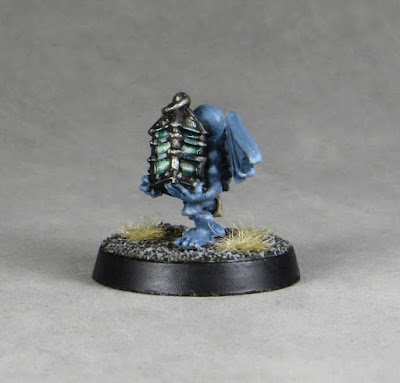 Very much looking forward to getting this pair in a game. I should dig out Karloth and his zombies and get them into the painting queue too!
#justiceforgary