"I will buy with you, sell with you" - A Pair of Merchants

﻿
In the bazaars and merchant's quarter of Sandport, trade is king. Itinerant traders from the wastes barter with merchants from the Commerce Guild, off-world hauliers and smugglers. Food and spices, wines, cloth, metal, munitions, slaves, fuel, water, drugs and more; it is all available for the right price and the right word in the right ear.
﻿ 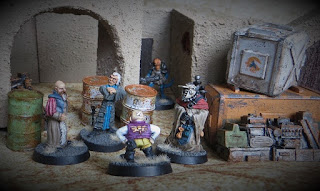 A pair of relatively newly painted figures to share with you today, both intended to further populate the streets and squares of various locations around the galaxy.
First up is one of my favourite new additions for some time. The figure is one of the Space Merchants from the currently running Astropolis Kickstarter from Lead Adventure Miniatures. I was very lucky to get a pre-release copy of this fantastic figure (thanks Alex!), and rushed it to the front of the paint queue. At the time of writing, there are just 52 hours left to get in on the Kickstarter, and with the fantastic range of hugely characterful space civilians available, I strongly urge you to go and check it out!
﻿

I decided to paint the Space Merchant with a functional and neutral robe colour, enlivened with splashes of colour on the shawl, tabard and pouches. 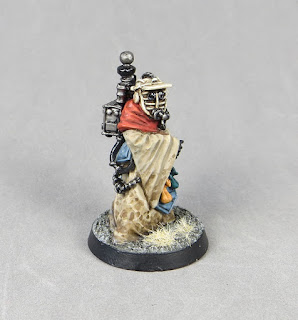 The figure was an absolute job to paint - great level of detail and a crisp, but chunky sculpt. I particularly love the weird mask / hat combination. 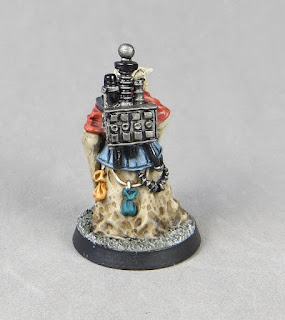 I also decided that as the Space Merchant was so coy about showing his face, he was probably reluctant to show any flesh, so I painted his hands in black gloves for good measure! 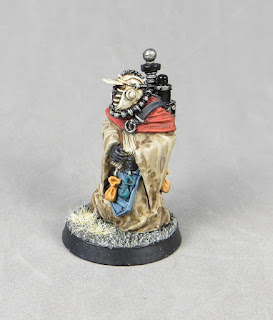 Next up is a figure that I actually painted a few weeks ago, purely on a whim because I anticipated it would be pretty fast. The figure itself is a Bobby Jackson sculpt from a range I'd not heard of before called Conspiracy X. I picked up a battered blister from old stock at a local store containing a pair of Atlanteans (male and female). It turns out that Conspiracy X is an RPG loosely based on the X Files by Eden Studios. You can still pick up this figure (called J'acks) from the online store, along with two others (Agents Sculder and Mully).

All that's largely irrelevant to me though, as he makes a rather nice merchant, minor official, household servant or similar for my games. 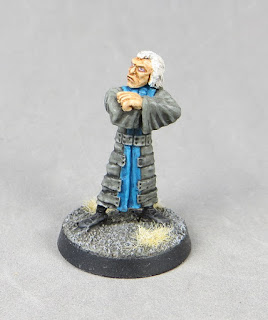 I've used the same grey that I've used on a range of other figures (my Adeptus Administratum, Adeptus Custodes and a few others). This will mean he can fulfil a range of different uses. 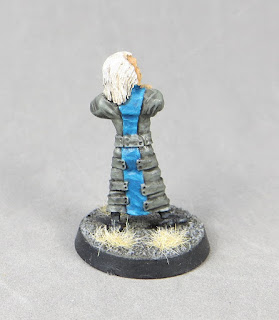 The figure itself is OK - he has a big head, thin ankles and is a very flat, 2D miniature. But I really like the pose and the facial expression, and that's what counts!
Posted by axiom at 15:37