I haven't painted any Blood Bowl models for an age - largely symptomatic to the winding down of my local Blood Bowl league, with several folks moving away, and others of us becoming more interested in Inquisimunda. Over the last couple of years, I ran the Talk Fantasy Football forums annual Legacy Team - each contributor makes and submits a model, there's a draw, and the winner gets the team. This year, I decided not to make it 4 years in a row, and let Rory (aka Frogboy) take the reins. He's done a grand job marshalling the contributors and cajoling people into completing their models before the 1st of September deadline.

This year the theme was a Khemri team, with a strip in turquoise and gold. I signed up to make a Skeleton, and this was the result: 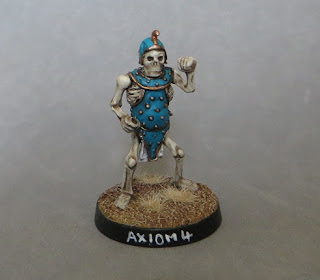 The Skeleton was made from splicing an old Citadel plastic Skeleton, with a Eunuch Hareem Guard from the excellent Dark Fable Miniatures range. The little cobra on the helmet is just a small sausage of greenstuff.﻿ 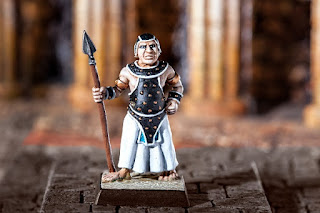 Removing the legs, arms and face were all real pigs of jobs and took forever...so much so that I nearly threw the butchered parts in the bin at one point!.
﻿ 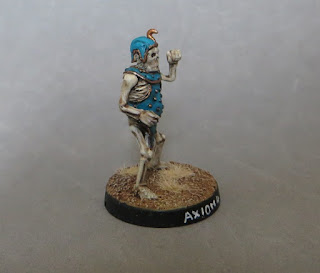 The Skeleton got a rather quick and simple paint scheme, in line with the theme. The final touch was the traditional name and number on the base, so the new owner can see who made any given model. 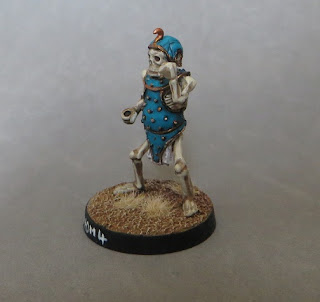 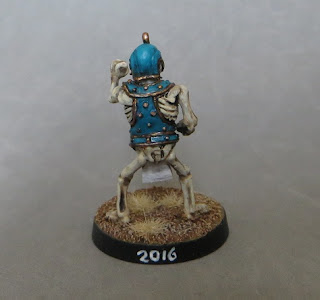 I suspect this might be my only Blood Bowl figure this year, but it was nice to contribute something to a larger project.
Posted by axiom at 16:56