﻿
The Ogryns Security detachment had broken the latrine system yet again! What in the name of the Emperor did they try to flush away?! Sub-Engineer Grungi, Menial Holst and mobile diagnostic unit BM-B02 were despatched to investigate...
﻿ 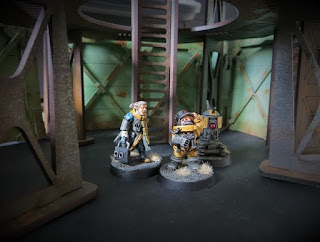 I put together this small engineering team after a mate recently gave me the cute little robot. He's made half a dozen or so of these robots to represent bombots for use in his Rogue Trader squat force. If you're not familiar with bombots, then head off to p121 of the Rogue Trader rulebook:


I'm not 100% sure on the components used to build these bombots, but I know the base tracks are from the Space Hulk C.A.T., and there are some backpack bits and plasticard in the mix as well.
I may well use the bombot as intended in some games, but I quite like the idea of it being a diagnostic unit for an engineering team. The squat engineer from the Rogue Trader Adventurers range seemed a logical robot controller. I also added in a menial using one of the Star Ship crew from the old Acropolis Future City range (still available from The Baggage Train).
﻿ 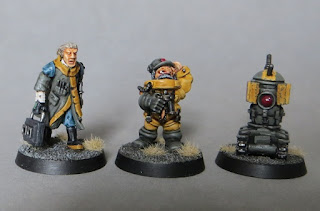 The squat engineer and his 'bot got a very simple grey and yellow colour scheme, with splashes of red on the 'bot's lens, and the squat's badges. 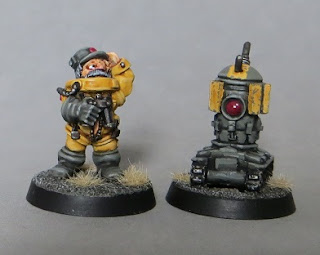 I also did a little bit of weathering on the bot to make it look like the yellow paint was chipping off. 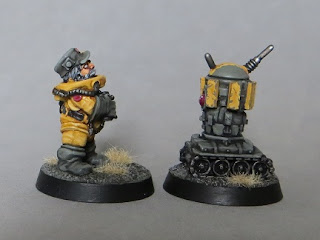 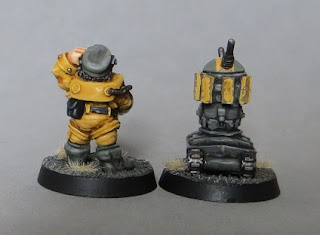 The menial got the same primarily grey and yellow scheme as his crew-mates, although I added in a few additional colours as the heavily layered outfit required it. The Future City figures are pretty crudely sculpted - slightly dodge anatomy, and pretty flat along the line of casting. This sculpt also had no right thumb, which I rectified with a small sausage of greenstuff in order that he can hold his ghetto blaster... tool box I mean! 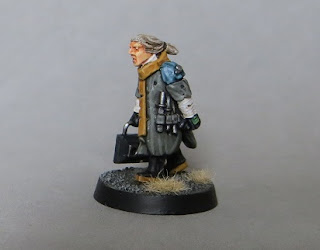 I suspect that innocent-looking engineering 'bots may be unexpectedly exploding in future scenarios - it only seems right!