I guess it was about 6 weeks or so ago when I had the idea. And this was the model that started it all:


I'd picked up this lovely sculpt of a sci-fi Halfling psyker sculpted by Paul Muller on a whim. Then I started musing about making a little Kill Team to accompany her - after all, I had half a dozen or so Citadel ratlings that would fit the bill. And then I decided it would be fun to try and make this Kill Team in time for a pre-arranged gaming session of Shadow War: Armageddon with some buddies. Notwithstanding other hobby commitments, the relatively compact timeframe, and the desire to convert and paint a brand new set of figures, I launched into the project with abandon!


First things first. Which faction list would best suit a ratling Kill Team? I elected to go with Ordo Xenos Inquisition because a) I've just finished an Imperial Guard Kill Team and b) it gave me the opportunity to make some dinky little Inquisition figures. Which is cool. Definitely not silly.

I'm going to show you the 'standard' troopers in this post, with the more exotic elements to come in a future post. So here are the first five of this brave, yet tiny warband: 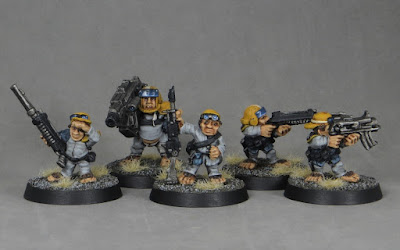 The five ratling troopers comprise three armed with lasguns (or sniper rifles), a specialist with a bolter and a heavy weapons trooper with heavy bolter (or in the case of the Inquisition list, a storm bolter). Two of the figures are completely unmodified Rogue Trader sculpts, while the other three are converted to one degree or another. 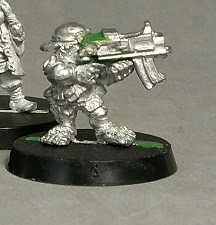 Wylow is armed with a bolter which replaces the original rifle I carefully carved away. I needed to do a little bit of filing and cutting down at the rear of the bolter, but I think it has come up pretty well. 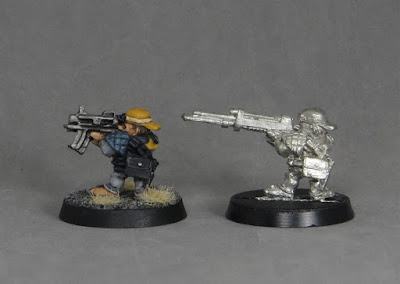 Next up are Totes 'Chunk' Greatfoot and Kenni B.  Totes was converted from the new Halfling Blood Bowl star player, Crumbleberry, currently a Warhammer World exclusive figure. Kenni B is made from an old fantasy Halfling. I replaced his spear with a Forgeworld lasgun, sculpted his hat, and added Victoria Miniatures goggles. 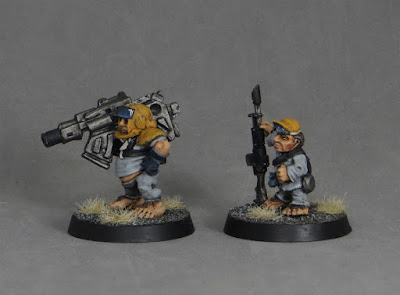 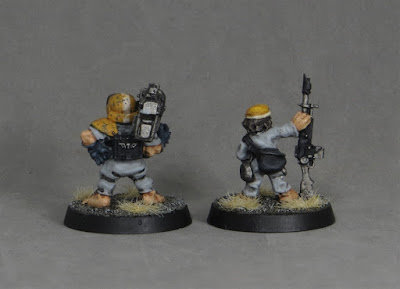 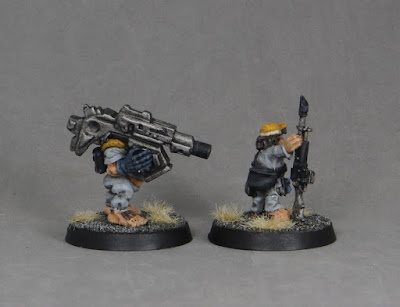 Below you can see the work done to transform Totes from a Blood Bowl star, to a chunky and muscular ratling.﻿


So that's the first members of the Kill Team. Hope you like them. I'm hoping to post about the remaining members, including Panadol, before the end of the week.