I admit it, over the last couple of months there has been a little bit of a hidden agenda with regard to some of my output. When Kill Team: Rogue Trader was released in September 2018, it sparked off the idea that I might be able to replicate the Imperial forces using actual Rogue Trader miniatures from the 1980s, rather than the modern plastics (which are fantastic miniatures of course).

This wouldn't be an exercise in proving that old is better than new, but rather that the modern figures have their archetypal roots embedded in 40k history. Below is my 10-strong proxy group of Kill Team: Rogue Trader Rogue Trader equivalents, comprised of:

The last two newly painted additions to the group are the Imperial assassin, and heavy weapons trooper (standing in for the Voidsman with rotor cannon).

This is a lovely sculpt (I suspect by Bob Naismith) which is really hard to photograph. She is posed in a dynamic, leaning stance, with both arms tucked in close to her body. Whatever angle you try to photograph her, she looks like she has mis-matched legs and weirdly short arms. These things are not true. She is a lovely delicate sculpt, with a really beautiful feminine face, and I really enjoyed painting her! 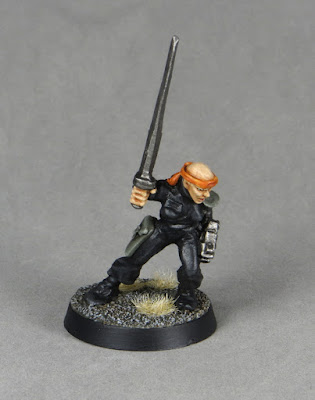 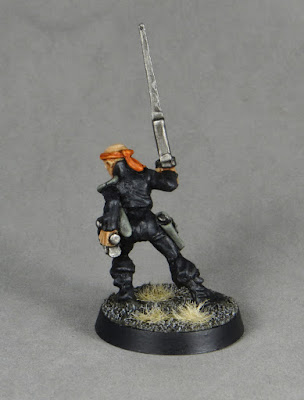 I replicated the black with orange colour scheme I used on the Rogue Trader and the commandos. Black works really nicely on an assassin after all!

I based the heavy weapons trooper on the Imperial Guard with autocannon (as described in the 1991 catalogue). Quite possibly this could be a flamer, or a lascannon or something else entirely, as it doesn't follow any of the standard patterns for weapons. It's definitely a heavy weapon of some variety though!

She got the same uniform as the rest of the commandos, although her orange-visored helmet is slung on her waist. In retrospect, I'd have liked a little spot more colour somewhere on her upper body - there's a lot of black going on! 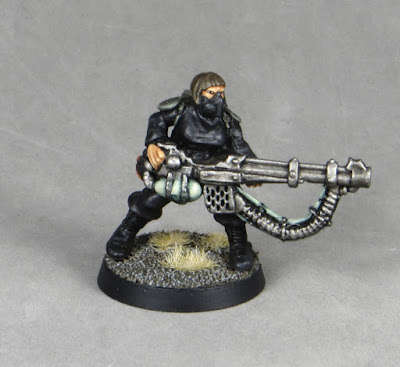 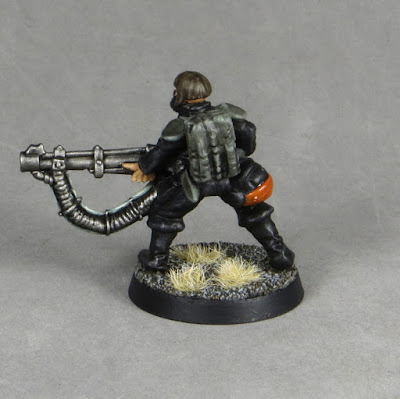 In order to tie the figure in better with the rest of the troopers, I covered up the vest top that the original sculpt wears, sculpting sleeves and a high-collared tunic. I also added another greenstuff cast backpack to match the rest of the group.

At this point I began to agonise about her head. I wasn't sure if the free-flowing locks fit the totalitarian militaristic style that the rest of the troopers had. In the end, I bit the bullet, chopped off the head and replaced it with one from a modern Sister of Battle. The more severe haircut and respirator do the job to tie her visually with the rest of the squad better, but at the sacrifice of a bit of a focal point to the front of the miniature.

All in all though, I'm pretty happy with how she works alongside her fellow troopers. 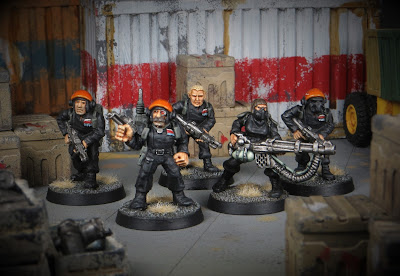 I'd love to hear your thoughts on the Kill Team: Rogue Trader 1987 project - hopefully I've captured elements of both the modern game and the classic miniatures. I've got my thinking cap on about Blackstone Fortress too - watch this space!