"Do you fancy painting a specific set of the weird spacemen that we have been drooling over for quarter of a century?" Cheetor said to Curis and myself. "As a group paint along?"

But which weird spacemen? Why the late 1980s Citadel Rogue Trader Adventurers range of course.


As with all paint along projects I've participated in, cheetor, Curis and myself are aiming for a mutually supportive approach which will result in actual figures being painted. Actual figures that for some cases have been on our wish lists or in our collections for literally decades.

Q. How will the process work?
A. We take it in turns to paint up an Adventurer, tagging the next in painter in a circular chain until we either paint up every single Adventurer model ever, or we get bored and decided to do something else.

Q. What figures are 'valid'?
A. After some discussion, we included some figures and eliminated others. Unreleased figures and the recently released Foundry Emperical Absolution and Liquidation Squad for example are not included. Squat Adventurers are. The definitive selection of permitted figures is covered by the catalogue pages below: 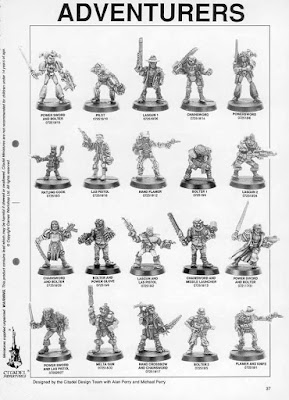 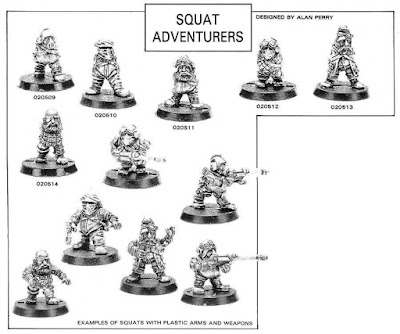 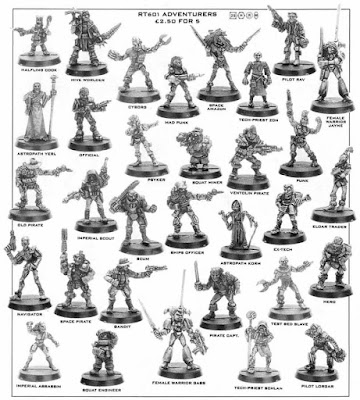 You have to admit that's a pretty iconic selection - some of the most characterful figures ever produced by Citadel, including some of my absolute favourites.

The hardest part to this project has been where to start and working out which models to select. I approached it from the perspective of trying to make a coherent group, and where better for my first selection of figures, than an Imperial Inquisitor and his retinue. Happily, our list of approved figures included a necessary Inquisitor model, masquerading under the catalogue title of 'Lasgun 1'. 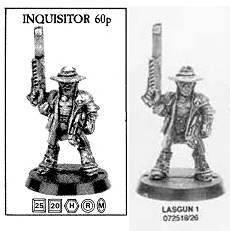 But who is this enigmatic character? We simply need to look at the pages of Rogue Trader to find out. He is none other than Inquisitor Obiwan Sherlock Clousseau. 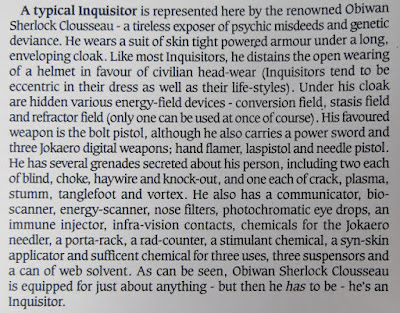 
The resulting figure oozes character with a strong Western vibe. He's the lawman taking down grox rustlers. He's the lone gunman coming to the aid of isolated promethium miners. He's the defender of townships against the warpaint-daubed Kroot. He's the voice of the Imperium in the wild fringes of settled space.
﻿﻿ 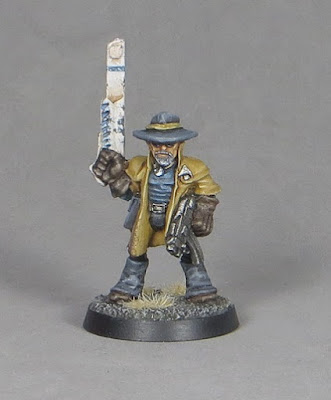 I decided to play up to the Western look with a tan overcoat and drab greys, blues, black and brown. There is a little yin and yang symbol on his medallion which reflects the chest icon from Martin McKenna's illustration.﻿﻿ 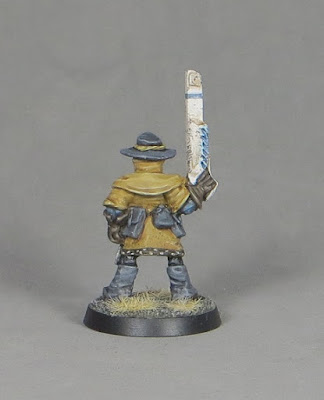 Similarly I added a some cheques to the trim of his coat, again the reflect the illustration. 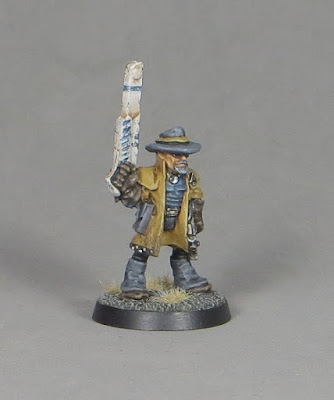 The sculpt seems a little older and more grizzled than the wild-bearded illustration, so I gave him a greying beard and slightly sallow skin tone. 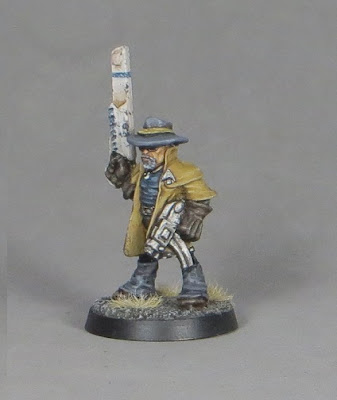 As for his, um, 'lasgun' - I'm not entirely sure what it's supposed to be. A shotgun perhaps? Or some kind of advanced close combat weapon? On cheetor's suggestion I painted it up as a Tau-esque pulse weapon (which seems fitting for an Inquisitor, who I suspect is from the Ordo Xenos).

On that note, the sculpting on the figure leaves a lot to be desired. There are lots of details which are unclear, poorly executed or blend into each other. I'd go so far to say that this sculpt is more crudely executed than pretty much any other Rogue Trader figure I've painted...and that says something! 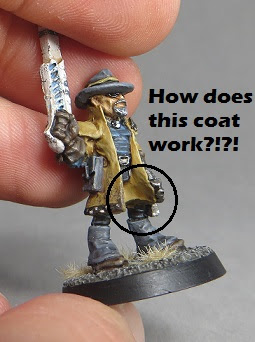 But for all his faults, Inquisitor Clousseau is a prime example of character being distilled into a figure. Does it matter that he's carrying a stupid block of a weapon? Does it matter that his left leg must go through a hole in his coat lining? Not really, because the resulting figure just oozes John Wayne or Clint Eastwood.